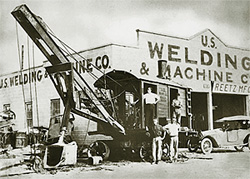 The company got its start in 1916 when Alex DeBogory Sr. established the 7th Street Bicycle Repair and Welding Company near downtown Miami.

He believed that “a solid foundation is a prerequisite to build” whether building a bicycle or a business.
Our founder recognized that quality products, superior craftsmanship and outstanding customer service would serve as this foundation.

As these companies and divisions grew, we realized we could serve our customers more efficiently with brands that would better identify their exceptional products and services. This structure also would bring individual identity and pride to each business and its employees.

Four generations of the DeBogory family have guided the company, which is now an industry leader in the 21st century. USF Fabrication, Inc. holds fast to the strong foundation on which it was built. We will continue to set the standard by investing in our people and technology, working toward continuous improvement of our existing products and developing new ones so we many better meet our customers’ needs.

We welcome any feedback, questions or comments